Many people (especially those on the right) believe that the suspicious packages sent to multiple democrat leaders and supporters are fake, or at least a “False Flag” intended to change the narrative of the political scene. Some have even called it a “Pipe Bomb Mid-Term Hoax” to incite the democrat base and to change the narrative that the democrats are the party of mobs.  While it remains to be seen if the conspiracy theory is true, there are many reasons that may support it’s merit.

10 Reasons Why the Pipe Bomb Mid-Term Hoax Conspiracy Theory May Be True :

Why Would a Republican Do This?  – First of all, you have to ask yourself, what is there to gain for the Republican base by sending bombs to members of the Democrat Party?  It just doesn’t make any sense. Yes, of course there may be an unhinged right winger out there that reached his or her tipping point.  However, as a whole, a pipe bombing spree doesn’t benefit the Republican Party in any way.

On the other hand, a change of narrative and a reason to ignite the democrat voting base seems to make more sense.  The democrats have more of a reason to stage a hoax as a means to achieve their political goals, regardless of how unscrupulous the method may be.

Public sentiment has turned against the democrats.  Citizens see the “Jobs not Mobs” slogan that Trump gave the democrats.  They see a caravan of possibly 14,000 migrants closing in on the U.S. border seeking asylum.  The vast majority of American’s do not like open borders with the feeling that they are being invaded.  In fact a recent poll says that 76% of registered voters are against open borders.

Bombs Don’t have wires connected to both ends – This comes from Tom Sauer, a former bomb disposal expert.

A few observations from a former bomb disposal officer (i.e. Me):

Tom then goes on to state these points :

2. You can find timers / remote control receivers WAY smaller than whatever that white box is. A proper timer would best be stored inside the pipe, making it fully encapsulated. That thing is just silly looking.

Where Are the Postmarks On the DELIVERED Packages? 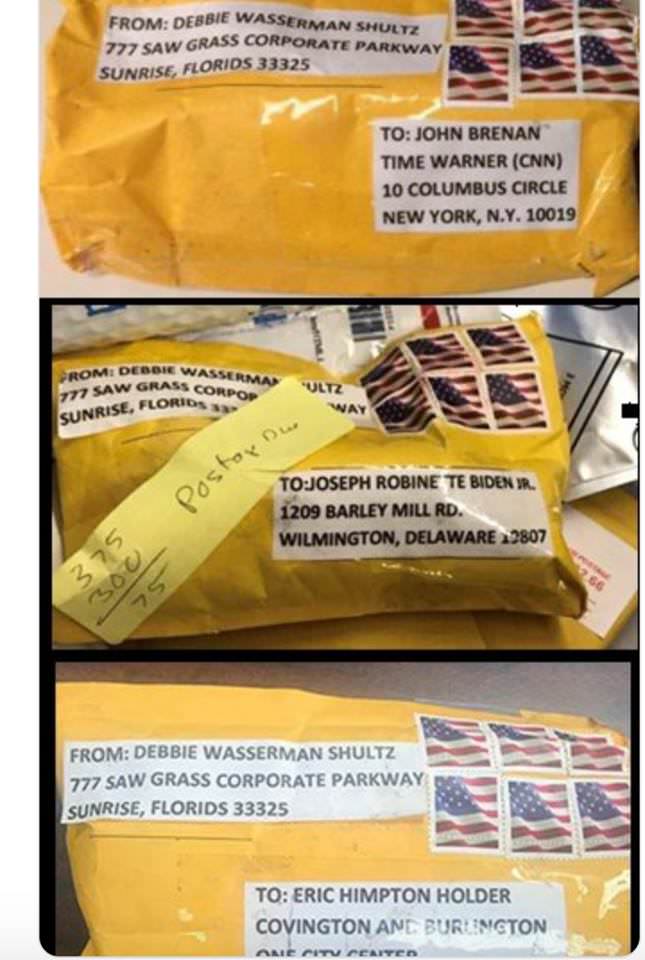 Notice there are no postmarks or stamp cancelations on any of the “delivered” phony bomb packages?  Here you can read how the packages were DELIVERED to former Attorney General Eric Holder.  Not only were they DELIVERED, but law enforcement “Sources” say that it went to the wrong address and then was returned to the return address of Debbie Wasserman Shultz.

Ok so, in the photo images above, where are the postmarks or stamp cancellation marks?  Postmarks are used to de-face the stamp and to prevent future use.

Here are some more points to consider that this may be a “Pipe Bomb Mid-Term Hoax”  :

Distraction from the Growing Caravan Invasion

What started out as 3-4,000 people in the migrant caravan from Honduras may have blown up to 14,000 (and growing). The democrats are in a desperate need to distract the public’s attention.  American Citizen’s want border control and when the caravan arrives at the border and Trump sending the military, chaos may ensue.

Notice the decrease in Caravan news coverage since the pipe bomb investigation began?

Change the Narrative and Make Democrats the VICTIMS

The democrats know that the Caravan coverage has blew up in their face (no pun intended).  With the mid-term elections around the corner, they needed to change the narrative.  The news coverage focus had been on immigration invasion of 14,000 migrants from Guatemala, Honduras, and El Salvador, marching towards the border with hopes of illegal asylum.

With Trump promising to stop the invasion, the focus needed to be changed before mid-term election.  The democrats want to impeach Donald Trump, but the only way that can happen is if they take over the majority in the House and Senate.

Since the mail bomb investigation began, the news coverage has immediately switched focus to the “pipe bomber”, and yes of course back to Donald Trump.

Make The Pipe Bomb Scare All About Donald Trump

Nearly every news channel has been focused on Donald Trump and how he has caused this entire event to happen.  They say that Trump has divided America and unleashed a SERIAL bomber on to the leaders of the democrat party.  Never do they say a word about Maxine Water’s call on the public for civil unrest.. They fail to mention how Maxine Waters has encouraged her supporters to get in the faces of Trump supporters and staff members wherever they may be.  Never do they talk about Hillary Clinton and her statement that the democrats can’t be civil until they regain control of the House and Senate.

The Republican’s Are #Winning in Early Voting! 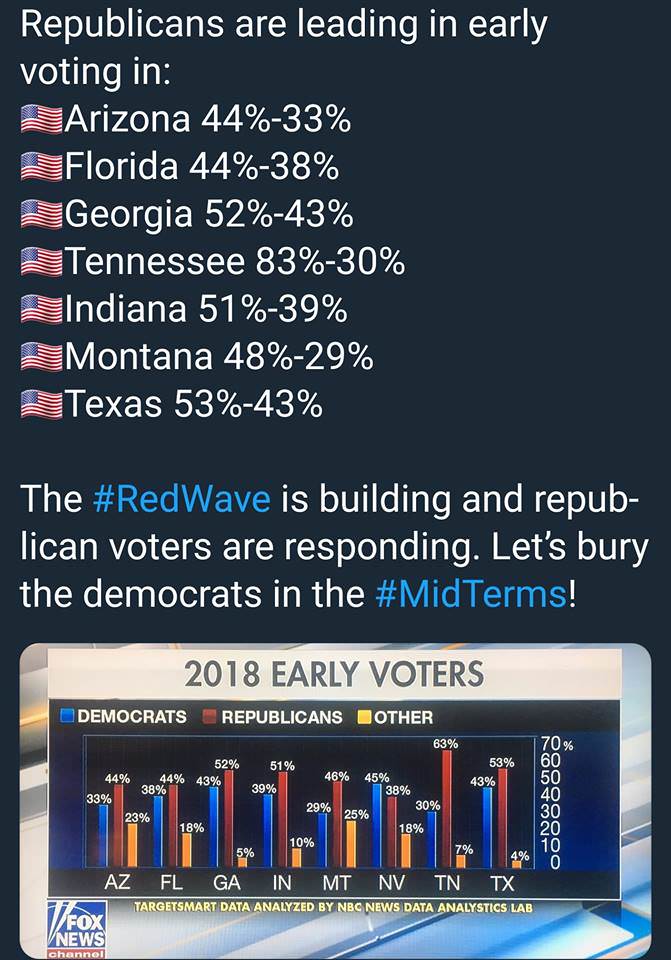 Here is a meme of some key states that show that the Republican’s have been up big in early voting.. If the democrats have any hopes of taking the Senate, then they must win key swing states.  The early turn out has been strong for the Republican’s and the democrats needed to do something to get their base to the voting booth.

In Conclusion – The Democrats Have Many Reasons to fake a Pipe Bomb scare..

While this is an Op-Ed piece about 10 reasons why the pipe bombings may be a hoax, or even just a conspiracy with merit.  This is solely my pesonal opinion, but there is at least substance behind all the “conspiracy theories” that are out there.

The media will use the term “conspiracy theory” as a term that should only be associated with nut cases.  While, there may indeed be an unhinged man, woman or political group that sent these “suspicious packages.”, unanswered questions still remain.

The Democrats have shown time and time again, that there is nothing they won’t do to regain power. Even, if that means staging a hoax, a false flag, or even a coup on the presidency.

Please share with your friends, and maybe even Like “Rino Swamp” on Facebook.  We are a #MAGA community of patriots who love President Trump, love America, and want to do our part in supporting the country that we love.

Do you have any opinions about the pipe bomb events that have taken place?  Please leave a comment with us below and let us know what you think.